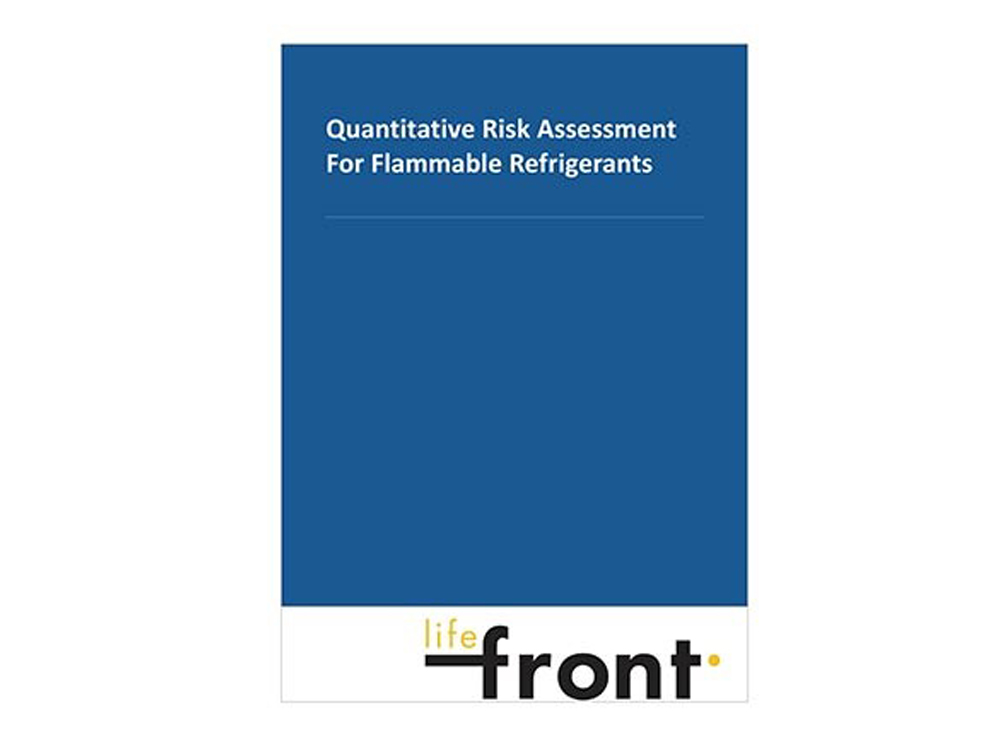 BELGIUM: A risk assessment by the EU-funded Life Front project has concluded that refrigeration and heat pump equipment using hydrocarbon refrigerants have a low flammability risk compared to other appliances.

Tests carried out on a commercial refrigeration cabinet, an indoor packaged air-to-water heat pump, and a ground source heat pump, assessed the effectiveness of the specific design in mitigating the risk and preventing the creation of an uncontrolled explosive atmosphere.

The report – Quantitative Risk Assessment for Flammable Refrigerants – is the culmination of a project aimed at removing “barriers posed by standards” for flammable refrigerants and improve system design to address flammability risks.

Life Front was established after a European Commission report in 2017 called for a reassessment of flammable refrigerant standards which it saw as a barrier to low GWP alternatives.

This latest Life Front report follows previous studies of the impact of standards on hydrocarbon refrigerants in Europe and a field study on leaks in RACHP equipment and lab tests on gas concentrations.

It focuses on improving product design by making modifications to current practice to accommodate for the use of larger hydrocarbon charges and by evaluating options for passive and active risk mitigation measures. Tests were carried out on prototypes from project partners AHT, AiT and NIBE. Prototypes included a commercial refrigerating cabinet, an indoor packaged air-to-water heat pump, and an existing ground source heat pump specifically designed and modified to function with R290.

The effectiveness of the specific design in mitigating the risk and preventing the creation of an uncontrolled explosive atmosphere was assessed and a robust and reliable methodology for evaluating the safe usage of a product using flammable refrigerants was defined.

The group concludes that the flammability risk presented by the use of hydrocarbon refrigerants is low compared to the fire risk associated with other comparable equipment and appliances. It highlights the example of an AHT Vento Hybrid multideck refrigerated display cabinet employing 500g of propane (R290) which was shown to have a flammability risk several times lower than the background or residual risks (such as from electrical fires, etc).

The report does not shy from the fact that hydrocarbon refrigerants are flammable and if used in RACHP equipment, the likelihood and severity of the hazard needs to be minimised.

Daniel Colbourne, the Life Front lead technical expert and project engineer at HEAT GmbH, said that the hazards identified and analysed in the tests often arise from “human errors or misbehaviour”.

“Detailed and easy to understand instruction manuals and well-trained technical personal for installation, commissioning and decommissioning are consequently seen as effective mitigation measures to reduce identified risks. Hermetically-sealed leak-tight systems are also seen as essential to prevent the formation of an explosive atmosphere within and surrounding the appliance in case of a leak,” he added.

Life Front argues that while training for safe handling of hydrocarbons is currently available in Europe, it is not consistent. “Apart from those under the ATEX Workplace directive, the demands to mandate it at a national level are vague,” it says.

“Raising awareness of this directive (especially its Annex II(A)) is recommended, since it was found in meetings of interest groups that the majority of stakeholders and practitioners seem to be largely unaware of it.”

The report can be read and downloaded here.