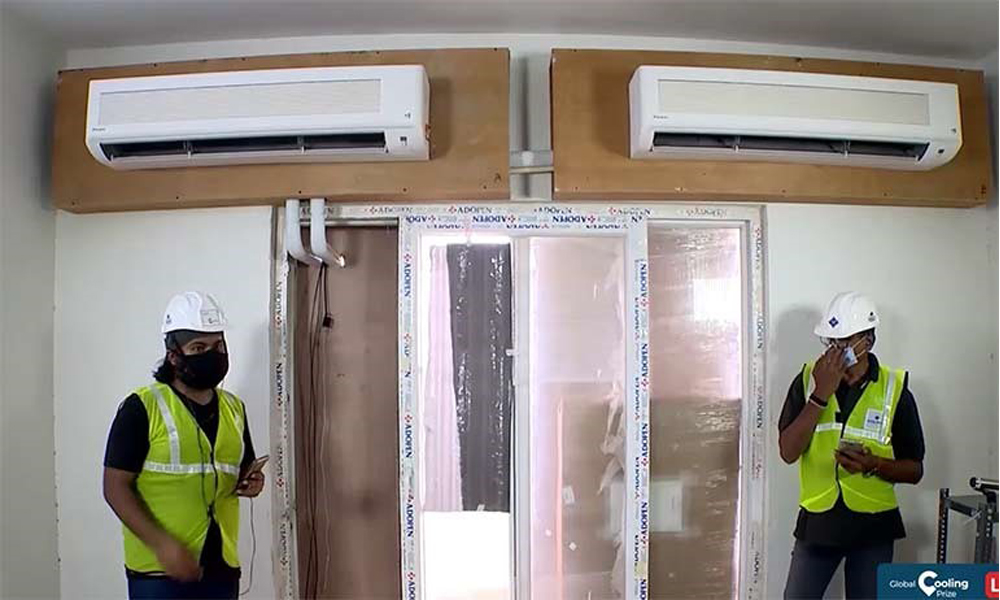 INDIA: Teams led by Daikin and Gree have been named as joint winners of the Global Cooling Prize, the international innovation competition to develop super-efficient and climate-friendly residential cooling solutions.

The $3m initiative, launched in 2018, with backing from British entrepreneur Sir Richard Branson, sought a residential cooling technology with at least five times less climate impact than standard room air conditioning units and an installed cost not more than twice that of the baseline AC unit when manufactured at a scale of 100,000 units per year.

Despite competition from other cooling technologies among the eight finalists, it was Daikin and Gree’s developments based on traditional vapour compression systems that won the day.

Daikin with partner Nikken Sekkei, one of the leading Japanese architecture and engineering design companies, proposed a system to ensure consistent room temperature and humidity using two specially adapted indoor units running on the the low GWP refrigerant R1234ze(E). The system also measures the outdoor temperature and automatically sprays water under high ambient temperature conditions, to lower the temperature of the air that the outdoor unit takes in.

It employs a new design of compressor using low GWP refrigerant R152a and improved evaporator and condenser systems to more effectively cool and dehumidify the air. The solution also included a small solar PV panel integrated into the outdoor unit.

R152a is an A2 flammable refrigerant with a GWP of just 124. While it has previously been considered as a replacement for R134a in car air conditioning, its current use is as a component in a number of new lower GWP blends.

The performance of all the prototypes were compared against the baseline unit – a fixed-speed, mini-split type RAC unit with an ISEER rating of 3.5W/W that used R22 refrigerant. The baseline unit was deemed representative of the most commonly sold RACs in the Indian market in 2017.

Applauding the winners, Tom Steyer, founder of NexGen America, stated: “These technology breakthroughs, coupled with the ambitious commitments made in the Race to Zero, exemplify the incredible progress that can be made when innovators are mobilised, the right incentives for change are identified, and cross-sectoral stakeholders work together.”

“A market transformation opportunity for the cooling sector is now a reality, which can help combat the warming of our planet,” commented Sir Richard Branson. “As this incredible achievement begins to be recognised and applauded, it’s time for regulators to focus on the policies and standards that will help us bring these technologies to the markets.”

Delighted at the award, Dong Mingzhu, chairperson and president of Gree Electric Appliances, stated: “We are committed to delivering the Race to Zero Breakthrough for Cooling: to bring to market affordable residential AC units using this new cooling technology by 2025.”

Kanwaljeet Jawa, MD and CEO of Daikin India, said that Daikin’s selection as a winner was consistent with the company’s Environmental Vision 2050, which provides a roadmap for the company to carbon neutrality by 2050.

Daikin’s prototype was evaluated in terms of the technology innovations, but admits the company that there are issues that will have to be resolved and the technology if the prototype is to reach commercial reality. A major issue is that R1234ze, being a low pressure refrigerant, requires substantially larger equipment to be used.

In 2019, the eight finalists were awarded $200,000 each to develop their prototypes. The two winners will now share the prize purse of $1m.

The Global Cooling Prize was launched by a global coalition led by the Department of Science and Technology, Government of India, leading global research body the Rocky Mountain Institute (RMI)n and Mission Innovation, a global initiative of 24 countries and the European Union to accelerate global clean energy innovation.